The lovely folks at ChriBBL extend a warm invite to join us in Christchurch for our annual Mainland Bowl!

The suave and sophisticated Welshy is in charge this year as the tournie coincides with my wife's due date so I can't commit. I do intend to play if able though as I need to finally get my round 1 grudge match against Toffer underway after a 2 year delay

For those familiar with the ruleset, there have no changes since last year. For those new to it, the full ruleset is below: enjoy!

The Mainland Bowl 2014 will take be taking place on the 7th & 8th of November 2015 in Christchurch.This infopack should contain everything you need to know about Mainland Bowl to join in the fun. If you have any questions, please contact mainlandbowl@gmail.com.

Cost to you, the bloodbowler:
$40 ($30 if registered and paid before the end of September)

NAF Support:
This will be a NAF supported tournament. If you’re not a member of NAF, you can join up at the
tournament for a $15 fee. As well as the gift which NAF release each year, your results will be
uploaded onto the official NAF website.

Team Creation:
Team rosters must be submitted at the start of the tournament to the Mainland Bowl officials.
Coaches are given 1,200,000 gold pieces to create their team plus the Team Hero upgrade (see
below). This may be spent on players, rerolls, fan factor, assistant coaches, cheerleaders,
apothecary, single skills and inducements with the following requirements:
• All gold must be spent.
• There must be a minimum of 11 players in the team.
• All inducements are available as per pages 69 to 70 of the CRP. Cards are not allowed as
inducements.
• “Non-stunty” teams may only purchase one Star Player."Stunty" teams may purchase up to
two Star Players. "Stunty" teams include the following: Goblins, Halflings, Ogres, Underworld
(with no Skaven players), Lizardmen (with no Saurus players).
• If two teams play against one another with the same Star Player it is assumed that the Star's
"identical twin" has shown up to play for one of the teams. Both may retain their purchased
Star.
• “Normal” skills are available to purchase at a cost of 20,000 GP per skill. These may only be
skills which the player would be able to access on a normal skill roll. This is limited to 1
purchased skill per player. Star players may not be given additional skills.
• A limit of 4 instances of the same skill may be purchased across the team. This includes skills
given to the Team Hero (see below).

All team rosters must be checked by a Mainland Bowl official before being cleared to play.

Games:
Only FAME and Weather need to be organised before the coin toss. Illegal procedure may only be
used if both coaches agree before the start of the game.
Games are based on 4 minutes per turn. No overtime is played. It is up to both coaches to ensure
that games and post-match sequences are completed on time as no time extensions are possible.
Mainland Bowl Officials have the right to end matches as they stand if the matches are not finished
within the allocated time. Any coach found by Mainland Bowl Officials to be deliberately stalling for
time to run-out a match will be penalised with point deduction at the discretion of the Mainland
Bowl Officials panel.

Post-match Sequence: Complete the match result and hand it in to a Mainland Bowl Official. No
winnings are rolled and teams are completely reset after each match. Injuries do not carry over
between rounds and players do not gain additional skills.

Rules Queries:
If at any stage you are faced with a situation that can’t be solved between coaches and with the help of the rulebook speak to a Mainland Bowl Official. The Official's decision will be final and be applied for the duration of the tournament.

Painted Teams:
Miniatures must be painted to a “decent” 3 colour minimum standard. It is important that players
are able to be identified and, therefore, teams must be fully assembled. Players must either
adequately represent their race and/or position, or be able to be clearly designated as such either by the application of base-rings, distinguishing features or colours. All players must be clearly
numbered with preference for the number to be on the base on the front and back.

Round Match-Ups:
Round 1 match-ups will be set up to avoid member of the same club facing each other, if possible.
From Round 2 onwards the Swiss system will be used to select match-ups as per Score! sowtware.

Scoring:
Each round will be scored as follows:

If two or more coaches are tied at the end of the tournament then tiebreakers will be used in the
following order:
Opponents’ score (strength of schedule)
TD+CAS difference
TD difference
CAS difference

Signing Up:
If you want to attend, just send an email though to Welshy at mainlandbowl@gmail.com. Payment details will be sent through by email. 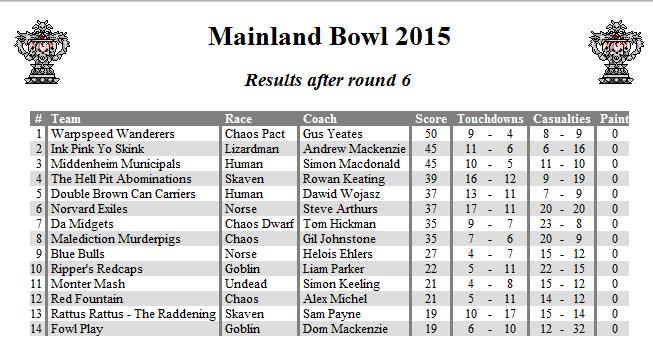 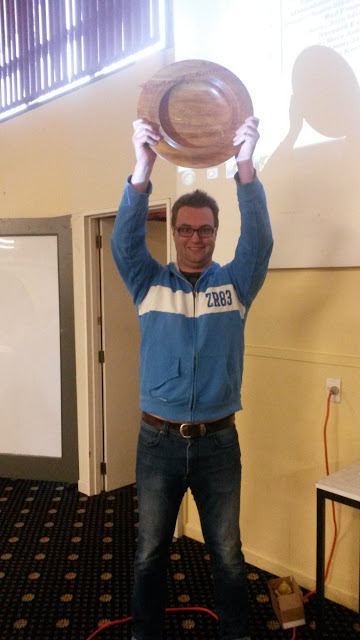 I am absolutely gutted I missed this, stupid real life.

Looks like you guys had a great time, well done!
Top