Cirwin Greenleaf a.k.a. "Not the face!"

Cirwin Greenleaf a.k.a. "Not the face!"

I've just got hold of the 2011 SSB MVP mini, Cirwin Greenleaf. I've yet to assemble him, but from an initial inspection of the parts, it looked to me like he has a ... somewhat interesting ... pose.

A quick google revealed these images: 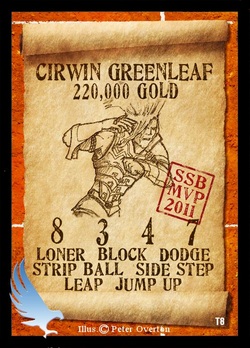 Which confirmed my suspicions. I appreciate it's all subjective, but to me it very much looks like he's cringing and trying to protect his face.

So I am going to assume there's some backstory around this guy that warrants the pose. Would any veterans from the 2011 SSB care to enlighten me? If I was to make an educated guess, I would say that this guy was probably the most frequently/reliably fouled player in that year? Would that be in the right ball park?

Just the crutch that One_Eye road to a podium finish

Lol yeah it was my mvp and it was basically just not well cast. The intention was to show a wandancer with a fighting pose mixed with a running element because Cirwin was a beast that year and did heaps of casualties and td's over the 6 games. The body itself was ok but the head never worked out the way it was meant to and it just didn't come together. The closed eyes i don't recall ever being in the pre-work drawings and the hair simply didn't work. Olaf would be best to tell the story but it's safe to say that Cirwin didn't work.
Ironman 24 Hour Challenge Tournament Organiser - https://www.facebook.com/pages/24-Hour- ... 7949351296
Top

Well, there you go. Cheers for the info, guys, much appreciated!

I can see this going one of two ways, now.
It's quite possible that following option 2 will lose me the commission money that was promised. But I'm not in this for the money...

You could tuck a ball underneath his lower arm and make it look like he is running and punching but i can't help you with the god awful head
Ironman 24 Hour Challenge Tournament Organiser - https://www.facebook.com/pages/24-Hour- ... 7949351296
Top

you could always change the head for Mallus, but then you'd have Vain's side burns to contend with....
Top

If you want to do a Walked Over Cirwin, happy to give you mine to paint as well

Ugh. Customising metal is too damn hard. Managed to get a not-too-cringy pose happening with the standard connections. And now that I've got him up to this level of highlighting, I'm really reluctant about adding footprints!

Call me a coward, but I think I'm gonna declare this guy done. Matt: what colour do you prefer on your base circumference - black or brown?
The Go-Stew Orcs
Pheasant Pluckers
Top

And he's done! Unfortunately, despite my best efforts, I don't think I can make it to SSB this year. At least some of my handiwork might, though...

Nice. May he bring glory to your paint job!
Centaur of Attention - Season 21 MBBL

I should mention that this Cirwin did pretty well, gracing the pitch with his great paint job and helping the team to 4th.

He didn't feel particularly part of the Dwarf team though. Roughly 1 from 6 on loner rolls for the weekend and the one success he managed to reroll a skull into a skull!
Centaur of Attention - Season 21 MBBL

Dazedmw wrote:I should mention that this Cirwin did pretty well, gracing the pitch with his great paint job and helping the team to 4th.

He didn't feel particularly part of the Dwarf team though. Roughly 1 from 6 on loner rolls for the weekend and the one success he managed to reroll a skull into a skull!

... poor Cirwin... should have known he was for it with a Dwarf Coach at the wheel...

D_Arquebus wrote:Or was used as a disposable road block against Tackle Zons and paid the price ... poor Cirwin... should have known he was for it with a Dwarf Coach at the wheel...

In my defense that was his fault!

If he had picked the ball up first time as asked, he would have been on 'hiding in cage' duty rather than 'screening Zons away from the cage' duty.
Centaur of Attention - Season 21 MBBL